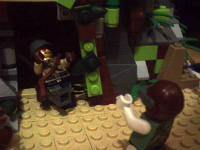 We’re back with another (mis-)adventure of the fabulous Dr. Garlic! As you might have guessed from reading the title, this post contains a doom-filled cave. Uh … moving on…

Let’s see … well … Dr. Al Gene has run into a misfortune! It sounded like an angry cave beat up on him, but I should probably start from the beginning.

Al and Typhon stayed at Crazy Uncle Henry’s — I mean, the sagely wise man‘s hut for a while, then on July 9th, they went back down the mountain. It was much more peaceful and tranquil than during their hike up, which had been quite fraught with gusts of wind. Once they arrived at the bottom of the mountain, there was a surprise waiting for them!

Nope, it wasn’t an angry cave. The surprise actually came in the form of Dr. Gene’s buddy, Dan Dirtie. That dude is really tough; he said he left the hospital and walked six miles to go surprise Al. As you can see from the pictures, the guy was using a crutch/cane and he had on casts. Now when you take into account the fact that he had just recently survived a “Grand Slam in the head” and a bunch of broken ribs, you begin to comprehend just how extremely tough he is.

Anyway, when Typhon and Al were standing there chatting with Dan, suddenly there — you know, I’ll just let Dr. Garlic’s journal entry tell the story:

Oh my, where to begin? It all happened so fast! We met up with Dan in this heavily-forested area and he had walked there to surprise Al and we talked a bunch once we reached this clearing and I bumped something with my staff and there was a click and and and and … then there was this horrible thud and Al was gone! I don’t have any idea what to do!

I need to calm down. I won’t do Dr. Gene any good by becoming a soppy pile of nervous breakdown.

I am just so upset that I am the cause of Dr. Gene’s death — No! He’s not dead … I have to believe that he’s still alive. We will find you, Al!

Sounds like Dr. Garlic’s not doing too great. I hope him and Dan will be able to save Dr. Al Gene!

Oh, I just remembered: here’s Dr. Garlic’s latest map. “The peaceful mountain of tranquility” seems to be a misnomer for this strange mountain if I do say so myself.

Dr. Garlic seemed to be of a similar opinion. Perhaps that is why he titled the cave “The Doom-Filled Cave”?

Anyway, thanks for reading! Hopefully next post will find Dr. Gene in less dangerous circumstances than this one.