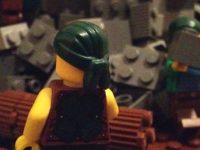 Three hundred years that tower stood, tall and proud, a bulwark, a symbol of what this land means. Or meant​. Now it’s been reduced to rubble, and for what? Just to slow us down…

I knew that the treasure was important to them, but I’d have never taken the Doc or his compatriots for vandals.

Actually, I take it back. The girl, she would do it. She’s got a screw loose, that’s for sure. It was probably her idea, and the rest went along with it because they saw no other way. Or maybe because they’re afraid of her, I really can’t say. They’ve been three steps ahead of us for so long. I barely remember what they were like.

Ah! those were the good old days, when we were all just pals, not competitors. There I go with the euphemisms again… Enemies. We’re enemies.

Not to say that they represent everything we stand against, or something philosophical like that. They simply got a head start on us, and they captain couldn’t abide that.

This isn’t the life I thought I’d lead. Far from it in fact, yet… I can’t say it’s all that bad. The crew, we share a camraderie, that’s for sure–we’re good friends, in spite of the circumstances of our meeting. I admire the captain, he’s a fine leader and every bit as respectable as you could ask a man of his vocation to be. Admittedly, this isn’t his finest moment–he’s cursing up a storm right now, as only a true pirate can.

Mulligan is complaining about his back but the first mate is having none of it. Good, everyone knows the fellow’s never told the truth in his life, and I can’t imagine he’s suddenly started now. He’s like the boy who cried “wolf”, except that there’s never been or will be a wolf, and “wolf” is the only word he’s ever spoken.

There’s got to be something important in here for those pompous know-it-alls to go to such lengths to block it off. Oh, sure, they may hinder our progress, but we’ll catch up. That’s the thing, we’ll catch up, and we’ll have the last laugh. Billy Misfortune and his crew, we always, always get the last laugh.

Pirate and loyal member of Captain Billy Misfortune’s crew. Ex-associate of Dr. Garlic. The thrill of treasure hunting is what gets me up in the morning … that and the threat of Mr. Spivey’s whip!

All posts by Zhonn Anderson →

One thought on “Decimation”