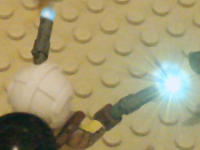 The Emperor of the Dark Lands has reared his ugly head and attacked Convergence Point!

Not in person, of course. He’s far too cowardly for that. (I hope that statement won’t be the end of me!) He sent his war machines, his foot soldiers, and his commanding general to do his dirty work for him.

Unfortunately, I don’t have all the details so I’ll have to be a bit vague in some cases. As you can see, Dr. Typhon Garlic’s journal entry was not all that informative:

It’s got the important event of today, but that entry’s certainly much more terse than usual! I guess ol’ Typhon jes’ weren’t in a writin’ mood today. 😉

In fact, I actually received only this entry, several photographs, and a bloody rag from the carrier birdy. Thus I was understandably worried (especially by the bloody rag), but the carrier birdy assured me that Typhon was doing just fine.

Anyway, the saloonkeeper’s liquor shipment had just arrived Saturday, and pretty much everyone had been drinking non-stop.

I assume this timely arrival of the liquor was yet another part of the Emperor’s plan. Anyway, by the time the invasion force had been spotted, most of the residents were fully incapacitated.

The sheriff thundered into the saloon with a shout of “Hey! we have an invasion force outside! That dark Emperor guy’s cronies are less than a mile away, and they don’t look like they’re here for a drink.” Screams ensued, and many of the few who were able to fight fled outright.

The defenders ended up being basically just the sheriff (Calico Max), the mayor, the saloonkeeper, Zhonn, Nob, Typhon, Quarrelsome Bert, Joe, some pirate guy, and Invinciman. A respectable group (with the very possible exception of Quarrelsome Bert, who was more than a little drunk even during the battle 😯 ), but a very small group for the defense of a whole town.

They stood at the southern borders of the town, awaiting the attack. Dr. Garlic pulled out his old protective helm, and his twin plasma pistols, Nob got out his (admittedly rather worn-down) ninja suit and weapons, and Zhonn pulled out his sword, a Vorpal Blade! Invinciman had his staff of battle.

As for the rest of the gang: Joe had a basic pistol, the pirate had an ancient flintlock pistol, the saloonkeeper had his grandfather’s assault rifle (“It works on more than goblins, you bags o’ bones!”), the mayor had a Thompson Submachine Gun, and Calico Max, being from our universe, the year 2451 A.D., had an amazing energy pistol.

(Did you know Quarrelsome Bert don’t like his picture being taken? See him with his store-stolen tomahawk in that picture? He shore looks angry!)

The war machines were equipped with powerful ray cannons and rail guns, and were reminiscent of tanks. Beyond that, they also functioned as troop transports, carrying many undead warriors within.

The battle went on for many hours. Although the defenders fought bravely, the invaders slowly drove them back to the center of town. There it became a stalemate, as the saloonkeeper and Joe had constructed a catapult to launch kegs of whiskey (which they lit on fire beforehand) at the undead attackers. I understand this was quite effective. 🙂

Suddenly, at 3:25 PM, the attackers began to draw back, and were soon in full retreat. The mayor and Calico Max wondered at this strange behavior, and some thought it a trick. But they did not return, and after several hours the defenders established a lookout, and went to get some rest.

As far as I could tell, everyone was relatively unharmed. Of course no one escaped without some type of injury, but they were basically all just flesh wounds. Nobody met with any accidental amputations. 😛

Well, that’s it fer yer daily dose o’ Dr. Garlic. Why not leave a comment and let me know what thought of the Battle of Convergence Point? See ya’ll next time!