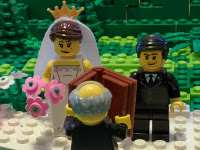 I just returned to my hotel room after spending my day at a wedding. My sister’s wedding, in fact.

That’s right: During the two years I was gone, it seems Alecia made up her mind to marry her boyfriend, Robert Richmond. I mean, he doesn’t exactly have that “follow-you-up-a-mountain-on-a-whim” spirit of adventure flowing through him that I generally look for in my friends, but he’s otherwise a pretty cool guy. Besides, Dad likes him, so who am I to interfere?

As far as I can tell the wedding was a pretty typical one, but then again, this is Alecia I’m talking about. For all I know, she spent hours selecting just the right color scheme for the occasion. Let’s just say that she pays a little more attention to detail than I.

The ceremony and reception were outside, and the weather turned out to be quite nice, with warm sunshine and a light breeze. (Yet another element I’m sure Alecia must have taken into account while planning).

The preacher was quite experienced, having proceeded over almost a dozen weddings by his own account.

His lisp wasn’t too distracting, and he even managed to get his coughing fit mostly under control. I can’t stop a simple case of the hiccups on my own, so I must admit that I was rather impressed by this.

My legs eventually got really stiff from standing throughout the ceremony, and at one point I felt like I was going to faint. However, I really didn’t want to ruin Alecia’s wedding day by passing out, so I forced myself to hang in there. Soon enough the ceremony finished and I was able to stretch.

And to think, all this time, he let me believe his first name was “The”! Boy do I feel silly now…

Anyway, the three of us chatted for a while while snacking. We mostly talked about what I had been up to for the past two (everyone keeps insisting it’s been only one?!) years.

Shortly we were informed that the time for cake had presented itself. Never one to pass up on a good slice of cake, I made my way over to the cake.

The caterer climbed onto the table, and started hacking away at the poor thing while whistling some somber tune. I’m not quite sure why he did this, but maybe Alecia had asked him to or something.

Hey, if he wanted to whistle a somber tune at a wedding, then who was I to judge?

The cake tasted great, despite how butchered most of the “slices” were. After cake had been eaten, there was some silly tradition about throwing flowers or something. I didn’t really care about it one way or another, but Alecia insisted I take a picture.

Too soon, the reception was over, and Alecia and Robert Richmond left on their honeymoon. We threw rice at their car because… uh… tradition? The caterers packed up as the guests began to leave too. Once the place was cleaned up, Dad drove Winstrom and I back to our hotel. Speaking of which, I still haven’t been able to find my adventure car. Probably lost forever in some forsaken landfill. Oh well.

Oh, before I forget, I’m gonna be hanging out with Winstrom this weekend. His birthday’s coming up on Friday, so I figured I’d spend some time with him. As a matter of fact, he seems to have something big planned, though I can’t be sure.

Seems Typhon had some pretty decent timing in getting back from Multera! Sounds like Alecia and Robert’s wedding was a blast. Also, I wonder what Winstrom might have up his sleeve! It sounds important. Go ahead and leave any speculations in the comments!

That’s it for today, folks–I’ll see ya’ll next time!

One thought on “Dr. Garlic at Alecia’s Wedding”