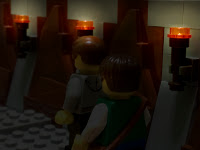 Yippee! Dr. Garlic is back, everyone!

Apparently his and Winstrom’s adventure after Winstrom’s birthday took a turn for the worse! They had obtained the coordinates to a rumored place called “the Labyrinth”, which was said to contain a clue about the location of one of the greatest treasures ever known.

In short, they found the Labyrinth. They only just escaped it today.

Now, what’s been going on these last eight months you ask? Well, on Winstrom’s birthday, he informed me that he had recently found a coupon inside of a box of cereal he was eating the other day. This coupon, he claimed, was good for a 53% discount on any treasure map from the local treasure map salesman.

And as it so happened, he had one map in particular in mind. A map to a giant underground maze known as “the Labyrinth”.

We booked a flight to the city of Heraklion on a small island in the Mediterranean named Crete. We followed the map to a manhole on the outskirts of the city. Lifting the cover, we saw on its underside an inscription reading “ENTER AT YOUR OWN PERIL”.

We figured it was just there to keep tourists out of the Labyrinth. Boy, were we wrong. We entered and pulled the cover back over the manhole.

Climbing down an old metal ladder, we found ourselves presented with an even older wooden door. Having heard that the Labyrinth was very difficult to navigate, we had prudently brought a ball of red yarn, which we promptly tied to the ladder as we entered.

We quickly found what we were looking for, a legendary artifact, and began to retrace our path to the exit. To our dismay, we soon found the yarn just ended in the middle of a nondescript hallway: we were lost! What’s more, the yarn appeared to have been cut cleanly through, and not torn.

As could be expected, we searched frantically for the other end of the yarn, but to no avail. After several hours we came to a room filled with food. What fortune!

The Labyrinth happens to be under the dominion of–you guessed it–a fearsome creature known as a Minotaur. This Minotaur was surprisingly friendly to us despite not telling us how to escape. He provided us with buffets, free of charge, three times daily. After a while, however, we realized this was all a ruse, and the Minotaur was trying to fatten us up so he could get the maximum nutritional value when he devoured us.

Of course we did not go along with this dastardly plan, and ate only as necessary, making sure we got the proper exercise in addition. However, despite perpetual attempts, we never found the exit. The hallways were all identical, and worse, attempts to map it were useless. The labyrinth would quake at random, we soon discovered, and just as we thought we had a section mapped, the quaking would occur and the layout was changed!

Unbelievable though it sounds, this stalemate continued for over a year, when finally today our salvation appeared. And it was a most unexpected one.

As Winstrom and I ate breakfast as we did any other day, suddenly around the corner came a most peculiar fellow. He was unshaven, he was caped, and he hovered several inches above the floor on a wooden pitchfork, of all things. He turned to us, trying his best to whisper. “There ain’t much time! We best get out of this place before the minotaur realizes I’m here!”

There was a thudding of hooves and a primal snort. “Mister fancy britches is right behind me, isn’t he?” Indeed he was. The minotaur dropped a roast pig he was bringing to add to the buffet. The man turned around as the Minotaur sized him up.

Unfazed, the man yelled out: “You take a seat, mister!” To our amazement the Minotaur complied. It flattened its ears like a dog that had been found chewing on electronics. “Shame on you for trying to eat these poor young’uns. Bad cow!”

At this last sentence the Minotaur jumped up again, rage filling its eyes.

“Well now I’ve done it!” The man spun back around to face us and said with terror in his eyes, “There ain’t no cure for mad cow disease, kids! Run for it!”

We bolted off as fast as our legs would take us. What could only be described as a moo-roar sounded through the maze .(As it turns out, Nob’s imitation was right on the money.) The deafening MROOOOOOOAAARH! was right behind us.  The creature was slowly gaining on us.

“Wait a second,” the fellow suddenly shouted, “yes there is!” Directing his pitchfork with only one hand, he pulled a bag of powder from his satchel. “Here’s a little something you can eat,” he said while tossing the bag behind him, “you overgrown steak!”

We heard a final Mrrrrroaaaa- followed by a loud thud. “Whoo hoo! Sleeping powder! Never fails to impress. Don’t worry yerselves, the effect is quite localized.”

“Who are you?” I questioned as we stopped.

“Folks usually calls me Mister Slightly-Overweight-and-Illiterate Pitchfork-as-Broomstick Elf-Fairy-Godfather Guy,” he said, surprisingly matter-of-factly, “but since ya’ll seem like decent kids, you can call me Derek. My apologies that it took me so long to save ya’ll. Every few years some poor adventurers get trapped in the Labyrinth by that ol’ bugger. Lately I have been rather backlogged with stuff on my good-deeds-to-do list. I’m real sorry about all this; it’s all such a big mess.”

He wrung his hands and continued: “Ya see, I’s got me this big ol’ magic hairball that lets me know in advance ’bout folks that needs my help, an’ I write it all down in my planner. I had it all written down to help out you and Winstrom here last September, but just a couple weeks before, my cat Rufus done got into my study somehow. I just sits in shock when I sees the mess he made of it. He done torn up my planner and everything!

“Now I’m real bad at sorting and such, so naturally it took me the better part of a year to get my planner back together. Can you believe, this one poor feller had been working in a fast-food joint for months! And this other gal had lost one of her favorite earrings. And then there was– well, you get the idea.”

“Well, uh, thanks for the help. Better late than never, right?” Winstrom suggested.

“Yes sirree, at least, that’s what my pa always used to say. Then again he weren’t never on time for a thing his entire life… Anyways,” he motioned to a door, a door I recognized as the entrance! “It’s about time we got outta here, wouldn’t ya say?”

We came out into the daylight, and were blinded by the sun. It’d been a long time. Fortunately Derek had a potion he’d brought along just for us, that more or less adjusted our vision back to normal. We bid Derek farewell, then I turned to Winstrom. “You know, I thought we’d never get out of there.”

“Well, we have the artifact,” I pointed out, “and I don’t know about you, but after all that trouble, it seems kind of a waste not to do anything about it.”

Glad to hear the Garlic brothers are back, not to mention safe and sound. It sounds like they’ve got themselves a treasure hunt!

3 thoughts on “Dr. Garlic and the Labyrinth Rescue”