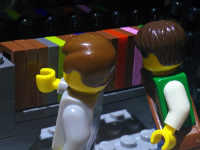 Hello and welcome back, folks! I’m happy to say that Dr. Garlic and younger brother Winstrom have safely returned from their unexpectedly long trip to Crete. What’s more, they found a guy who was “definitely a licensed therapist” who told them that they were back to normal and totally ready to continue adventuring. Yay!

Winstrom and I have just finished reading a book we borrowed from the library. The book is titled 💰 Æthelred the Second’s Ill-Advised Treasure Trove 💎. (Please do not ask why emoji are included as part of the title. I frankly don’t know, myself.) Now, you may be asking yourself, why this book?

Well, if you remember the artifact we hauled from the labyrinth, which was some kind of horn, we had realized during our time there that engraved on it was the ISBN of some book. Of course, we had no idea which book this might have been.

After flying back and checking with a very affordable therapist to make sure we had no residual effects from having been locked in the labyrinth for a year, we decided to see if the book could be found at the local library.

When we entered the library, we were greeted by the sound of someone beat-boxing. I was puzzled, as I saw the typical “Quiet Please” signs around. Looking around, we found–to our surprise–that it was the lone librarian.

I considered pointing out to the guy that beat-boxing probably didn’t meet the criteria for quiet, but decided to leave well enough alone. He was the librarian, after all.

We hunted around for the book after discovering that the library’s computer came up with a match for the ISBN on the horn. Sadly the books were the exact opposite of organized, and we spent most of the day there. Finally Winstrom located it, much to our relief.

We brought the book to the front desk to borrow it. The librarian was still beat-boxing, until we came near and he noticed us standing there.

“Why, hello there,” he said, “would you like to borrow that book?”

“Good, might I see your library card?” he said without waiting for a response. I handed the book and my library card to him. “Oh yeah, that book looks like it would be cool, I mean if you were the kind of person who likes reading. If I had to read a book I totally might read that one.”

“Wait, what? You don’t like reading?” I asked, surprised.

“Nah man, reading puts me to sleep.” He swiped my library card and scanned the book, then continued: “It all started when I wrote an autobiography in the 4th grade; it was so boring. Like really, have you ever written a story about an average kid who eats breakfast every day at 6:00am and probably cereal like Marshmallow Rubble Stars which by the way I loved when I was younger and my mom always bought it for me but now she doesn’t and I think she wrote me a letter saying why but I can’t be sure because of course I didn’t read it which is pretty silly I suppose like can you believe it because I sure can’t then again I always pretend my car is a giant flapjack skidding along the street so I guess I have that going on which reminds me of this one time when I was really hungry like I’m talking ‘I-could-eat-a-desk-and-then-the-chair-for-dessert’ level of hunger here man it was crazy you wouldn’t believe–”

At length he was interrupted by a beep from the computer.

“Huh?” the guy looked around, and seemed disoriented for a few moments until he got his bearings. “Oh good, Ol’ Reliable got the job done for once.” He handed the book back to me, saying, “bring this back in 3 weeks, no later!”

“Will do, thanks.” I said, and as Winstrom and I left, I heard the beat-boxing resume. It was dark out already.

We returned to our hotel and over the next few days read through 💰 Æthelred the Second’s Ill-Advised Treasure Trove 💎.

The book told a tale of the tenth-century king of the English, Æthelred II, most commonly known as Æthelred the Unready due to a mistranslation. Correctly translated he would instead be called Æthelred the Ill-Advised. It turns out this was a play on words in Old English, as “Æthelred” meant “noble counsel”.

The reason I point this out is because as it turns out, according to the book, because his advisors were not just somewhat unwise, but of ridiculously unsound judgement. History has not been kind to Æthelred II, despite the fact that he was among the most forceful kings of the period. Today his bad reputation is due in part to his advisors, and in part to the shift in the meaning of the word “unready” from “poor counsel” to “unprepared”.

The biggest blunder, said the book, came in the year 1013 with the imminent invasion from the King of Denmark, Sweyn Forkbeard. The advisors recommended that the kingdom’s riches be hidden so that they should not fall into the hands of the invaders. This plan seemed reasonable enough to Æthelred, and he gave the go-ahead.

Well, on the occasions the advisors gave seemingly okay advice, like this time, they always managed to mess things up somehow. They decided the best way to hide the treasures was to have one man from among them lead a caravan of mules into the countryside and hide the riches deep within a network of caves.

Records say that all had gone according to plan, until the man was reported killed on his return because he had insulted a group of the invading Danes. The whereabouts of the treasure were lost along with him. To this day the ill-advised treasure trove of Æthelred remains undiscovered.

Æthelred II was exiled to Normandy until Sweyn’s untimely death one year later, at which time he returned as king. He himself died only two years later, around the age of 50.

The lost treasure soon passed into legend, and then into forgotten memories for almost a, until a few years ago when the author of 💰 Æthelred the Second’s Ill-Advised Treasure Trove 💎 uncovered a manuscript. He was ridiculed by the scientific community, whether for his use of emoji in the title, or for his taking the manuscript seriously, I do not know. In the end he barely got his book published as historical fiction.

All in all, Winstrom and I found the book to be a little far-fetched, but believable. We are planning on drawing up a map of the invasion of 1013 and the surrounding countryside, and then investigating the author’s claims further.

I must say I’m excited to see how this all turns out, and I am fascinated by the story of Æthelred II. I hope the treasure is real, because after all, who doesn’t love a good treasure hunt?

One thought on “Æthelred the Second’s Ill-Advised Treasure Trove”